Dustin is one individual that has quite an employment success story. Although he graduated from high school several years ago, 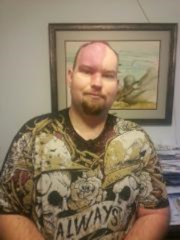 he has been looking for a job that matched his skills and interests ever since. He worked in a sheltered workshop, in order to supplement his income and keep active.

His personal agent assisted him to apply for Vocational Rehabilitation services. Things moved slowly at first, but Dustin was persistent and it paid off.

There was a job opening at Walla Walla General Hospital in the Cafeteria, which is run by Sudexo. Dustin applied for the job, interviewed and passed several tests in order to be hired for the position. His VR Counselor did a great job of coordinating with Dustin and his employer to make sure that everything got completed. She also arranged for job coaching, which was used briefly during his first few weeks on the job.

Today, Dustin is one of the best employees in his position in the cafeteria. He is a valued member of the team. His attention to detail is an asset there.  He is earning above minimum wage and works four days per week.