Vivian McEachran has battled low expectations her entire life. As a child, she was told she would never have her 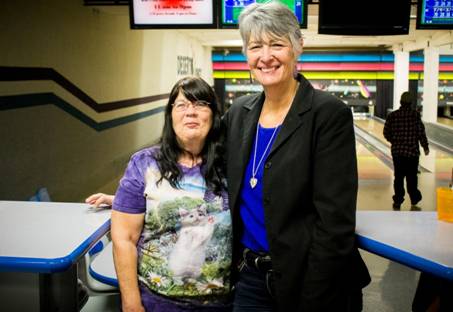 own family. As a young adult, she was told that she shouldn’t expect to work because of her intellectual disability.

Now at age 68, Vivian is married to her husband Clyde and has a son. And she works five days a week at Desert Lanes Family Fun Center in Hermiston. “I want to do things for myself, and buy things for myself, which is why I work,” Vivian said. Even though she is past retirement age, Vivian is determined to stay busy. In the past, she worked as a waitress and as a nanny in Portland. At first, some hesitated to help Vivian in her quest to find employment because of her age. Then Vivian found a champion in Vocational Rehabilitation counselor Diane Ashley. “Vivian is past the age that many people want to work, but she values a job so much and I could see it meant so much to her,” Diane said. “I started looking around to see what would be a good fit for her.”

Vivian is an athlete with the Special Olympics who has competed and won medals in sports such as basketball and track and field. But bowling is one of her favorite sports. She competed on the Special Olympics bowling team, and she bowls at least once a week at Desert Lanes with a team of other individuals with developmental disabilities from Eastern Oregon Support Brokerage. Diane met with Desert Lanes manager Christy Herman, and it turns out her timing was perfect. “It is absolutely critical to me to have my bowling center clean, tidy and presentable and I was just fed up trying to find someone to keep it the way I like,” Christy said. Christy had other bowling employees cleaning Desert Lanes, but she said that they did not perform to her standards. “It wasn’t done unless I did it myself,” Christy said. “I needed someone who cares about what they are doing and will do it right, even if that means it takes longer.” 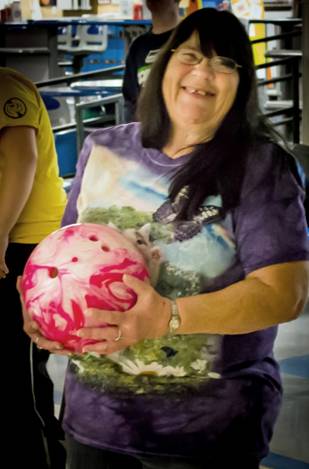 Christy agreed to hire Vivian, who she already knew as a customer. The relationship has blossomed and the two women are clearly fond of one another. “I like to keep my home clean,” Vivian said. “So this doesn’t seem different. And at home I clean up after men, which is the same here.” Vivian takes pride in her work. She finds items that are broken in the building, and quickly reports them to Christy. Vivian is careful and precise about her job. The fact that Vivian cares about the bowling alley makes her irreplaceable to Christy.

“I cannot tell you, as a manager, how hard it is to find someone who wants to work, cares about their work, and takes pride in that work,” Christy said, wiping a tear from her eye as she and Vivian smile at each other. “It has made all the difference for our business.”

Vivian said her job allows her to buy things she needs, like curtains for her house. And getting free bowling games as an employee doesn’t hurt either. “I need to get out in the community,” Vivian said. “I get to meet people, and make some money too.

After our interview, Vivian bowled a few rounds with her team. Soon her husband arrived to drive her back to their home in Irrigon (a small town near Hermiston). By all measures, Vivian has a full life, complete with the marriage, children and job she was once told were impossible to achieve.

“When I was younger, I wasn’t given a chance,” Vivian adds. “Nobody expected much from me. My boss is really nice. She gave me a chance to work, just like other people do. I always just wanted to have a life like other people.”

Thank you all for your continued involvement, support, and advocacy for services to individuals with intellectual and developmental disabilities in Oregon. If you have comments or questions, please email them to [email protected].